Have you ever wondered why we perceive beautiful things exactly as such? Or whether the concept of beauty implies inherent morality of a thing? Or what the position of the artist, or the creator of beautiful things is towards his artwork? All these questions have been challenged for as long as our species has been doing art, but only one movement managed to turn upside down our long-established views on the nature of Art. It’s name is aestheticism, a prominent representative of which is Oscar Wilde.

What is aestheticism and decadence?

To understand aestheticism, we first have to understand the larger movement from which it appeared — decadence. Decadence is largely a mindset and a mode of thinking, rather than a style of art. It is characterised by the perceived decay in morals, religion and culture. And though this name was popularized during the 19th century (hence the famous term “fin de siècleFrench term for “end of century” and is usually thought of as a period of degradation and decay"), the examples of it can be seen literally anywhere nowadays. Remember your uncle say that “the world is going to hell”? That’s an example of a decadent mindset.

And from this particular shape of thought aestheticism was born. The main object of this movement is the relation of beauty to morality. They posit that beauty does not necessarily imply morality. This was an audacious statement as before aestheticism the very notion of beauty somehow implied good moral qualities. A bad person theoretically could be pretty, but they could never be truly beautiful. But for an aesthete, a beautiful thing has nothing to do with morality. It just doesn’t care about being good.

Another important notion inherent in the aesthetic movement is the domination of art and aesthetic value over all other spheres of human life. Being a beautiful person is the most important thing of all, for an aesthete. And you can actually make sure of that by looking at the representatives of the movement. They are more of walking works of art than living beings.

What kind of personality was Wilde?

Oscar Wilde was one of those “walking works of art”, a person whose wit and ideas made him famous long before he published any of his works. He was just known by the public, not for any deeds, but rather for his extravagant ways of dressing and behaving, for his conversational skills and for his mastery at putting a whole world of thought into a single phase. One aphorism that characterises Oscar Wilde is this: "I find it harder and harder every day to live up to my blue china." This quote emphasizes the aesthetic focus on beauty and surrounding yourself with beautiful things. 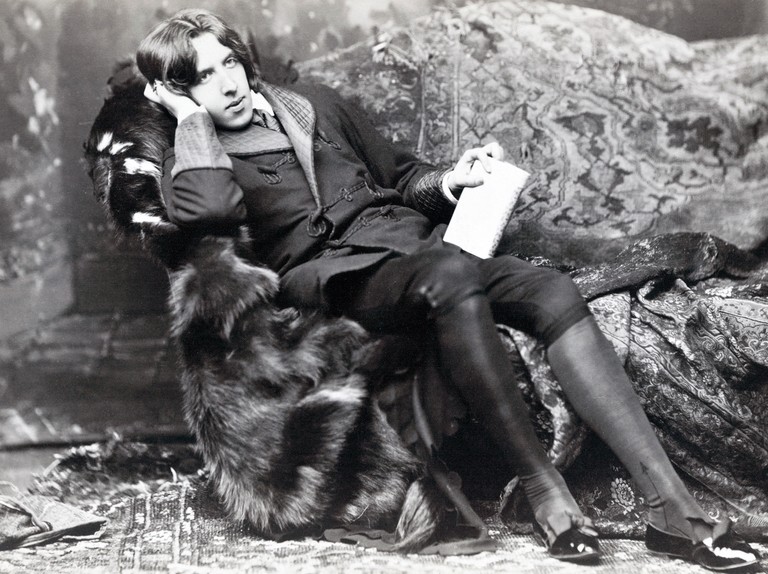 Paradoxes. Art & Life. Who influences whom?

Oscar Wilde’s major trademark was the use of paradoxes. They all serve a single and very important role – questioning the established and telling the truth. In his famous novel “The Picture of Dorian Gray”, Oscar Wilde states the following:

“Well, the way of paradoxes is the way of truth. To test reality we must see it on the tight rope. When the verities become acrobats, we can judge them."

And one of the major paradoxes that Wilde and aesthetes write about is that it is Nature and Life who imitate life, and not vice versa. To understand this, we have to go back to Ancient Greece and the famous philosopher Aristotle, who stated that all Art is imitative, it copies the surrounding world. We can also remember Shakespeare, who once said the Art holds a mirror up to Nature. Oscar Wilde strongly disagrees with that thought:

“Art finds her own perfection within, and not outside of, herself. She is not to be judged by any external standard of resemblance. She is a veil, rather than a mirror. She has flowers that no forests know of, birds that no woodland possesses. She makes and unmakes many worlds, and can draw the moon from heaven with a scarlet thread. Hers are the ‘forms more real than living man,’ and hers the great archetypes of which things that have existence are but unfinished copies. Nature has, in her eyes, no laws, no uniformity. She can work miracles at her will, and when she calls monsters from the deep they come.” (“The Decay of Lying”)

All that emphasises that the source of artistic beauty lies nowhere but within Art itself. And as for the who-imitates-whom part, Wilde’s opinion is quite definite as well, and he gives a few arguments in favour of his theory that Life imitates Art:

But Wilde does not limit the idea to Life. The same thing concerns Nature as well:

“Nature is no great mother who has borne us. She is our creation. It is in our brain that she quickens to life. Things are because we see them, and what we see, and how we see it, depends on the Arts that have influenced us. To look at a thing is very different from seeing a thing. One does not see anything until one sees its beauty. Then, and then only, does it come into existence. At present, people see fogs, not because there are fogs, but because poets and painters have taught them the mysterious loveliness of such effects. There may have been fogs for centuries in London. I dare say there were. But no one saw them, and so we do not know anything about them. They did not exist till Art had invented them.” (“The Decay of Lying”)

“The artist is the creator of beautiful things.” This is the first line in “The Picture of Dorian Gray”, and it immediately refers us to the ideas of the supremacy of aesthetic qualities of things. And the artist in this hierarchy is the most important person, as it is he who creates art. But where does the artist draw his inspiration from? From his own life or somebody else’s life? Never. Only a bad artist can try to mirror life, as in that case he would mirror a thing that in turn mirrors another thing (Art). A true artist should be inspired by the previous works of art and add something quite unique and “quite useless”.

Also, in his famous essay “The Decay of Lying”, Oscar Wilde argues that every great work of art has to lie in order to become outstanding:

“The only real people are the people who never existed, and if a novelist is base enough to go to life for his personages he should at least pretend that they are creations, and not boast of them as copies. The justification of a character in a novel is not that other persons are what they are, but that the author is what he is. Otherwise the novel is not a work of art.”

What Wilde tries to tell us here is that Art does not have to find it beauty outside, but rather within itself. It draws on the previous works of art as well as the artist themselves, but without dwelling on their biography.

Why is aestheticism still relevant in the 21st century?

Although many of aestheticism’s ideas are arguable, its ways of telling the truth through succinct and pithy paradoxes still makes us think and rethink our whole understanding of the world. Take its idea that Life and Nature imitate Art, and remember our modern culture of influencers. Although many of them can be barely called “works of art” in a way Oscar Wilde was, they still exert a lot of power on the shaping of our mindset, making us buy, behave, think just like them. This is just one of the numerous ways that Art influences our lives, and the aesthetes were one of the first people who started speaking about it.